Not All Who Are Lost, Wander 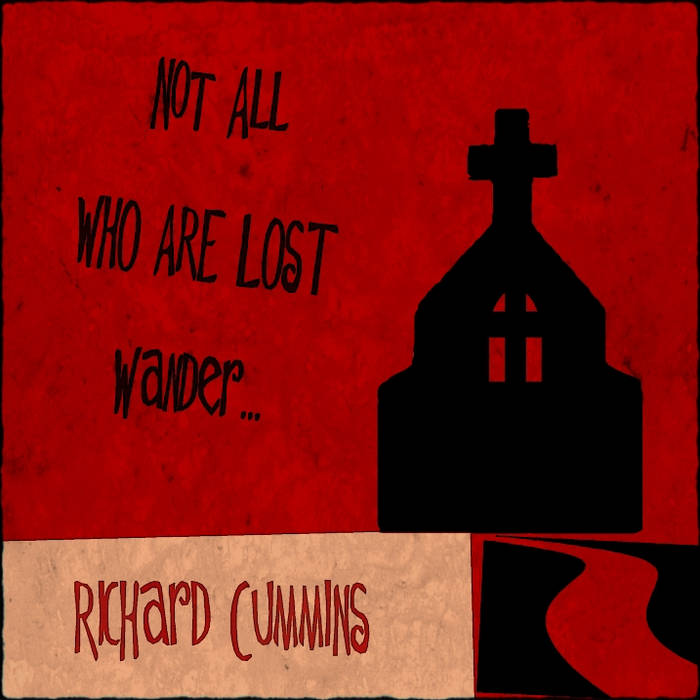 THIS is a Rock Opera 'Seria', realized by Richard Cummins - Impresario.
OPERA SERIA (SEH-ree-ah): A "serious" opera. The usual characters are gods, goddesses or ancient heroes.

The first line of JRR Tolkien’s famous poem from ‘Lord of the Rings’, "All That is Gold Does Not Glitter" is a variant and rearrangement of the proverb "All that glitters is not gold", known primarily from Shakespeare's The Merchant of Venice, resulting in a proposition bearing a completely different meaning.

In the tradition of this intellect, Richard crafts for himself an inversion of the famous second line, “Not all those who wander are lost” (which in itself is an inversion bearing the meaning that those suspiciously viewed as wanderers or vagabonds are actually moving about with purpose) into “Not All Who Are Lost, Wander”.

The striking ‘Saul Bass’ inspired album cover art drives home the point:
We tend to view forms of stability as ‘safe’, or ‘right’.

But does this mean that the lost are always prone to wander? Or, perhaps the contrary is true? Those whom appear the most stable, stationary, safest, the most ‘right’… could in fact be just as, or even more, ‘lost’.

The Characters:
The Seeker, The Girl on the Sidewalk, 2 Vultures, The Pastor, The Beast, and 'Someone There'.

“Not All Who Are Lost, Wander” is the story of journeys... a sudden and jarring realization of the lifeless monotony of the day to day, a haunting echo of a long ago feeling, a frustrating encounter at the door of the local church - begging the question of how gathered groups who seem so pious can be so dilettantish - the 2 beaches, and a promise.
Then, seemingly in a flash... The bus at Liminal St. is set to leave the grim, grey, joyless city, journeying toward the mountains and the sunrise. That heavy sunrise...

All instruments performed by Richard Cummins, except where noted*.

Everything about this record © 2014 Electro-Tone Records, Nectarine Horse Productions, Sir Richard The Lionheart

Drums By JOVAN (Vancouver, BC) On:

-The Kingdom Awaits
-Birth of the Beast
-Welcome to the Kingdom


Drums By Alexander Klassen (Vancouver, BC) On:


Saxophone on "Angels By My Side" BY: Colin Farquhar
www.colinfarquhar.com

Richard Cummins first sang with his Mother on a home made tape when he was roughly 3 years old, in tune. She, having grown up on 50's rockabilly and country icons like Loretta Lynn, taught Richard the guitar at an early age. But it was upon his discovery of the Beatles that made Richard obsess over music, learning guitar, bass, piano & drums and writing boxes full of songs. ... more

Track Name: A Simple Observation
Leave it alone; LEAVE IT ALONE
You don't know what you're doing
Or where to draw the line
You've given up refusing,
To die...

Bridge:
Here we go again
But we’ve been here my friend
A simple observation

Seemingly I'm ‘Free’
Then what’s this chaining me?
What’s happened to redemption?

Red Herring on the inside
Left you to search for more!
And you decide to close
The Door…


Spoken:
“Here we go again,
But we’ve been here my friend!

Seemingly we’re ‘Free’
Then what’s this chaining me?
What’s happened to redemption?”

© 2014 Richard Cummins
Track Name: Another Morning
Another morning filled with fear
If you could be, any place but here
Another war to win – another day begins

If only someone walked with you
Someone to notice, all the things you do
Someone to help you up when you are falling down

And sees you trying
Who hears you crying?

And through the crowds you’re heading home
So many people, yet still you feel alone
The soul reaches out to find something there…

Who sees you trying?
Who hears you crying?

Who sees you trying?
Who hears you crying?

I will be back
I will return

You, YOU
You tell me what you need and I will listen!
I have heard you for so long
But it sounds more real right here in person

“I will come back and find you again.
We will return to where it all began!
You will have tears in your eyes…
You will have seen through their thin disguise.”

© 2014 Richadr Cummins
Track Name: Saviour Soul
There's nothing you can do to save your soul
No words that can be spoken, none at all

No bank account can save you from your sin
Oh, no
No worldy possession is a ‘ticket in’
Yeah

Would you like it if I told your secret?
Would you tremble if I even came close?
Buried coffins freshly resurrected
Nourish vultures on the most painful parts

City slowly wakes itself
Feed Machine or feed yourself

OR, we:
Could go 'Soul Driving'

Chorus
The Sun comes up, the Sun goes down
And this whole world keeps spinning around
‘round, ‘round

You’re telling me that you can ‘see’
So why hasn’t anyone shown me?

Chorus
The Sun comes up, the Sun goes down
And this whole world keeps spinning around
‘round, ‘round

You’re telling me that you can ‘see’
So why hasn’t anyone shown me?

If you know it
You should show it…

© 2014 Richard Cummins
Track Name: Looking For An Answer (Fish On Your Shirt)
There’s a Bible Study every Sunday night
Every Wednesday night across the country
This has gone on for so long, you would think that people would ready

A girl I knew stopped to tie her shoe outside the Church upon the sidewalk
A seeker soul who only wanted to know, stopped as well and started to talk

“Why do wear a fish on your shirt?
Why do you meet on Sundays?
Why do you put a man up in a pulpit above everybody else?
And,
Why do you disagree with others who say that they believe just like you?”

Pastor Randall likes to wear his sandal on the beach in Southern California
He sings a song that includes the word ‘God’,
But nervously looks over his shoulder

Is this an answer?:

© 2014 Richard Cummins
Track Name: You Would See Enough (If You Could See What I See)
Look in the mirror
I see broken glass
But is it really shattered?
Or just the lines on my face…

Look out my window
I see dark grey skies
But is it really so bad?
Above the sun still shines

© 2014 Richard Cummins
Track Name: SAVE
And when I find myself
In these lowest depths
I struggle I tire but I know
I must take these steps

SAVE
Shine as you light my path!
SAVE
Turn my spent hourglass
SAVE
And heal my pretentious and cluttered soul

© 2014 Richard Cummins
Track Name: Brand New Day
Sometimes I wish the world would stop - rewind
So I could start again - this time:
I would love a little more
Complain a little less
Rise above it all, and
Be a better friend

Sometimes I wish that I could see, beyond
The moment so I could, respond
And make a better call
Choose a different path
Wipe away the tears
And make a point to laugh

Bridge:
The past is gone,
It's good as dead
And we can only look ahead
And make the best
with what's left
Of today!

© 2014 Richard Cummins
Track Name: Just Amazed.
I can't sleep
I can't walk
I can't speak
When I try to talk
And it must be something's really got a hold on me

I start to cry
Then I laugh
When I think
Of everything I have
And it must be 'cause you've got me under your spell...

I want to stand on holy truth
In the face of every lie.

© 2014 Richard Cummins
Track Name: Twinkling Of An Eye
Soon, we will be waking to
A day we can't believe
Someone will be whispering your name
And a face, you will not see

Bridge:
And no one needs to tell you
It's there for all to see
And love is in the air to be received
Once you believe

The ancient burning bush still burns
It's flames touch the sky, and
Souls swept up
In the twinkling of an eye

Bandcamp Daily  your guide to the world of Bandcamp